Weeki Wachee Springs is a tourist trap in central Florida. It became a Florida state park in 2008. It's west of Orlando and north of Tampa. The spring is famous for mermaid shows, a spring-fed water park and beautiful clear and blue water. For years Weeki Wachee was known as the deepest underwater cave system in the U.S. Many people dislike the development and wish the spring's natural environment was better preserved. 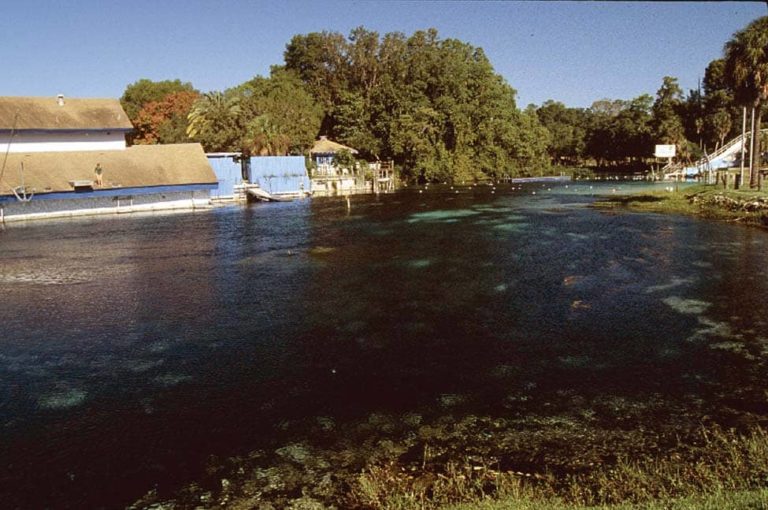 Weeki Wachee Spring is a large first magnitude spring in Central Florida. It produces more than 117,000,000 gallons of water per day.

After rising from the head spring, spring water flows into the Weeki Wachee River. The river travels for 12 miles before mixing with the Gulf of Mexico.

The head spring vent is approximately 100 feet deep inside the main spring, where underwater mermaid shows are performed.

Like many other Florida stories, the Weeki Wachee story is filled with controversy.

Many people are angry over the history of environmental exploitation, mismanagement and destruction of what was once a beautiful, natural spring.

In many ways, Weeki Wachee is a classic example of Florida’s over-development and environmental exploitation. A pristine spring environment was paved over. Why? To sell tickets to a tourist trap.

If you look at an aerial photos, you’ll see that development has consumed and surrounded the spring on all sides.

The spring basin is cornered by two busy highways, and the area is almost completely surrounded by concrete.

Thankfully, public opinion has changed some over time. Today’s public knows how fragile and priceless Florida’s springs and water resources are. It’s getting better with every generation. People don’t want to see springs wasted, or ruined any more.

Thankfully, there is hope for Weeki Wachee. Since 2008 it’s been under the protection of the Florida State Park system. Maybe that will help protect it.

Perry was a colorful character. He was an early adopter of SCUBA technology, which was a new invention at the time. Jacques Cousteau tried his first Aqua-Lung prototype– the ancestor of modern SCUBA equipment– in 1943.

Perry had helped develop other natural springs into tourist traps, including Silver Springs and Wakulla Springs. He allegedly helped train U.S. Navy personnel in SCUBA, and had a successful career as a movie stuntman.

When Perry first found Weeki Wachee Springs it had been abused. Like many springs and sinkholes, it’d been used as a garbage dump. it was filled with junk — old cars, refrigerators, and more.

He cleaned it up and built a crude underwater auditorium. He installed a glass wall which looked into the spring like an aquarium. Inside the water, he’d rigged air hoses for performers to breath underwater. He hired local women, some as young as 15 years old, to swim in the springs and give performances.

In the early days, some of the early mermaids remember hearing a car coming down the highway, and running to flag them down to come watch the show. The show began with modest roots, but it grew fast.

By the late 1940s and 1950s, Weeki Wachee was one of the most famous and popular tourist attractions in the world. The beautiful young women were glamorous; they were treated like movie stars. Women from across the world auditioned to be Weeki Wachee mermaids.

The ABC years marked the peak for Weeki Wachee’s growth and stardom. In 1971 Disney opened in Orlando, two hours to the east. Public attention abandoned Weeki Wachee, and went to Disney instead.

The health of the spring suffered. Eventually, it caught the attention of the Florida government and the Southwest Florida Water Management District.

The Water Management District was responsible for the health and management of the region’s water resources. They tried to enforce environmental regulations, but were met with delays and stall tactics. Eventually they sued the operators, and were met with more delays and legal maneuvering. Source: NPR Report

Amid the lawsuit, water management district officials say the operators used the national press for free publicity and marketing.

As part of the legal maneuvering, the operators at one point “donated” their interest in Weeki Wachee’s lease to the City of Weeki Wachee, which has since been disbanded.

Eventually, the water district sued to terminate the operator’s lease. In 2008 the State of Florida turned the site into a state park.

The whole thing was a mess, typical of Florida scandals. Eventually the State of Florida would disband the city of Weeki Wachee amid accusations of mismanagement and conflicts of interest.

Thankfully, Weeki Wachee may now be in better hands. The spring is still not natural, or totally protected. There aren’t any plans to restore the pristine natural environment. But, at least things are a bit better.

In 2013 year the State of Florida began renovations and site improvements. They tore down unsafe, neglected waterslides and structures. They built environmental barriers to reduce the amount of pollution which flows into the springs. Source

Like many of Florida’s freshwater springs, Weeki Wachee has a very long history of human use.

The name Weeki Wachee was first used by Seminole native Americans; it translates to “winding river”, or “little spring”.

In 1969 workers, using a tractor to clear land, accidentally dug up the Weeki Wachee Mound.  Using archeological evidence, scientists found that the site was used by indigenous people from 1300-1725 AD. If other springs are any guide, it was almost certainly used for thousands of years before that. Source

Despite its history of controversy, Weeki Wachee Springs is special to many people. Whether warranted or not, it commands a deep sense of nostalgia. The site defined the local community, and it created a unique and glamorous life for many people who were along for the ride.

There are many water-based activities inside Weeki Wachee Springs State Park.

The site is unique because it is the only natural, spring-fed water park in Florida. The water is not chlorinated. Like most of Florida’s springs, the water stays a consistent 72 degree water year-round.

Manatees live in the Weeki Wachee River and are common to see. The water is very clear and shallow, so the manatees are very easy to view. They sometimes come into the Buccaneer Bay swimming area to interact with park guests.

Kayaking is popular on the Weeki Wachee River. Visitors love the peace and quiet, and the chance to see manatees. A common complaint is that motor boats are allowed on the river, which detracts from the experience.

It seems as if it’s possible to launch private canoes and kayaks from inside Weeki Wachee State Park, but only with reservations. Be sure to call and verify before making any plans. Kayaks, canoes and SUP paddle boards can be rented from inside the park, or through an outside vendor downriver.

Disposable items are not allowed on the river. Reusable containers are allowed. A size limitation is enforced on coolers.

There are not any camping options inside Weeki Wachee State Park

Underwater cave divers have explored the cave system extensively, but it’s still not fully mapped. In 2007 explorers found that Weeki Wachee was 407 ft. deep. At that time it was the deepest known underwater cave in the U.S.

The spring kept that honor until 2012, when divers discovered that Texas’ Phantom Springs Cave was deeper, at 462 feet deep.

Tip: Click a link to view similar springs by feature.

The park and spring are located on the west side of US Highway 19.