Hornsby Spring was a beautiful 1st magnitude spring. Today it's owned by a religious compound and is surrounded by private property. Hornsby Spring has been damaged by water pumping, and stopped flowing. It suffers from low aquifer levels and pollution. The spring was the site of important prehistoric archeological finds. Mammoth and mastodon fossils were found with stone tools and evidence of prehistoric human hunting. 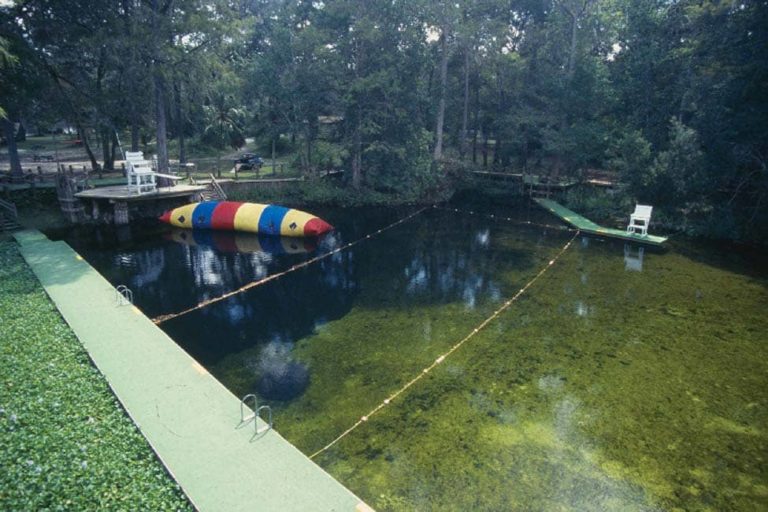 Hornsby Springs is 1.5 miles north of High Springs.  The Spring is about 300 ft northwest of the private camp entrance, surrounded by private property.

It’s connected to the Santa Fe River by a beautiful, lush and shaded spring run. The spring run is approximately one mile long. It’s about 15 feet wide in most parts and is approximately 5 feet deep. It appears to be navigable with canoe or kayak but there are some reports of possible obstructions.

The spring has a circular spring pool. It measures approximately 155 ft from north to south and 147 ft from east to west. There are docks and a blob water feature, used for playing.

The water is clear and slightly greenish blue. The depth at the spring vent varies, but is recorded as 34.5 ft.

The spring has an underwater limestone ledge on the north side of the spring. The ledge is under a floating walkway. There is an underwater cave system beneath Hornsby Spring, which has been explored and mapped to the east.

The spring basin and run have large amounts of algae and aquatic vegetation, as does the Santa Fe River.

Hornsby Spring flows occasionally after periods of heavy rainfall, when local water levels are high. But, there is no pattern of healthy, consistent flow like there was when the spring was healthy. When water flows there is sometimes a spring boil, or even two. One boil is located on the edge of the Santa Fe River floodplain.

The surrounding natural environment is lowland and Santa Fe River floodplain. It’s heavily forested with cypress, gum and maple. There is some high ground on the east side of the spring, about 6 feet above water level.

Like many Florida springs, Hornsby Springs has been used by humans for thousands of years. Hornsby was an important archeological site, as was nearby Darby Spring.

A 1961 Florida Geological Survey explains the site’s significance and exciting discoveries. Artifacts show that prehistoric man may have herded animals into Hornsby Springs as a hunting tactic.

“In the springhead and spring run at Hornsby Springs fossilized mammoth remains have been and are being found, some in association with lithic (stone) artifacts.” “The ground surface at the basin surrounding Hornsby Spring was, like that of the Darby Spring site, littered with the chips and flakes of an extensive lithic (stone) workshop”. Source

The religious compound surrounding Hornsby Springs was built in 1953. According to the Camp Kulaqua website, the location was chosen because of Hornsby Springs. It says the founders kneeled together in prayer at Hornsby Springs, asking for guidance to buy the spring.

At that time, Hornsby was a healthy, natural spring. It had a strong, consistent water flow. It was a beautiful and beloved swimming hole. It was among the top-tier of springs, in a select group known as first-magnitude springs.

Magnitude is a unit of measurement. Basically, it refers to the strength and volume of a spring’s water flow. A lower number is stronger; a higher number is weaker. First magnitude springs are the strongest springs.

Besides being a first magnitude spring, Hornsby attracted other recognition. It was designated as an “Outstanding Florida Spring”; a special honor given to Florida’s best springs.

Being an “Outstanding” spring meant Hornsby spring deserved extra protection. It was unique, and very high quality. It should be protected.

Sadly the health of Hornsby Spring has seriously deteriorated over time.

Twenty years ago, “you used to could swim straight down 80 feet,” recalled Theresa Sroka, a former camper who’s now Kulaqua’s marketing director. “There was a floating dock in the middle and the lifeguard would sit on it, because it was so deep.”

But then the flow began slowing, and in 2003 it stopped.

The formerly healthy, 1st magnitude spring has stopped flowing. At times, the spring’s water flow was measured as “zero”. It’s possible the spring may have even flowed backwards at times.

Why? The spring was drained by over-pumping water from the Florida Aquifer.

The pristine water was contaminated with sewage, nitrates and phosphates. The pollutants fueled runaway algae blooms, health dangers and other problems.

The pollution levels rose until the spring became unsafe for swimming.

“It became a stagnant pond,” said camp director Phil Younts. The water quality fell below what the health department required for swimming, so “we had to bus kids to other places to swim.”

The pollution flowed from many sources. Some pollution came from the Camp Kulaqua water treatment system, septic tanks and other sources. It seeped into the ground, the aquifer, the spring, and the Santa Fe River.

In 2015 government agencies got involved.

The Department of Environmental Protection and Suwannee River Water Management District stepped in to stop sewage and wastewater from flowing into the Santa Fe River.

This article from the non-profit group, Our Santa Fe River, details the project:

The camp has its own plant which allowed nitrate-laden effluent to enter first-magnitude Hornsby Spring, located on the property.  Utilizing the city’s treatment facilities will allow the camp’s wastewater to undergo improved processing and disposal, saving the river from heavy doses of nitrates.

The SRWMD grant will fund the construction of the needed pumping station and 6,000 feet of a 6 inch pipe, which is estimated to require about a year to complete.

These same threats — over-pumping and pollution — threaten all of our springs, our aquifer and our drinking water supply.

Historically, Hornsby Spring was the main attraction of Camp Kulaqua.

That was before the spring stopped flowing. Today, the spring may be used, but it’s nothing like it once was. The spring is barely mentioned on Camp Kulaqua’s website.

Ultimately the camp paid $1.6 million to build a water park to replace the spring. Sometimes campers can still jump into the spring bowl, now less than 50 feet deep. Most days, though, the spring that was the centerpiece of the camp is off limits.

Water for River Ranch is pumped up from the Florida Aquifer.

The water park is private and not open for public access, except for occasional “community days” where the public can pay to enter.

Some online comments are critical of the camp because of the conditions in an onsite “zoo”, which is advertised on the camp’s website.

Large exotic animals, including a bear, tiger, lion and cougar, are kept in small cages. Some of the cages appear to have concrete floors.

I grew up going to Camp Kulaqua and they really need to shut down their “zoo.” It’s basically a gross roadside type of zoo with super stressed out animals in very small enclosures. It was disturbing to see as a child and still upsetting as an adult. Please close this zoo down, it’s not how God intended animals to live. Source

A Stetson University professor blog reports a nice 2017 visit to Hornsby Springs and the Santa Fe River. Thankfully it looks like environmental work may be starting to have some positive impact.

Tip: Click a link to view similar springs by feature.